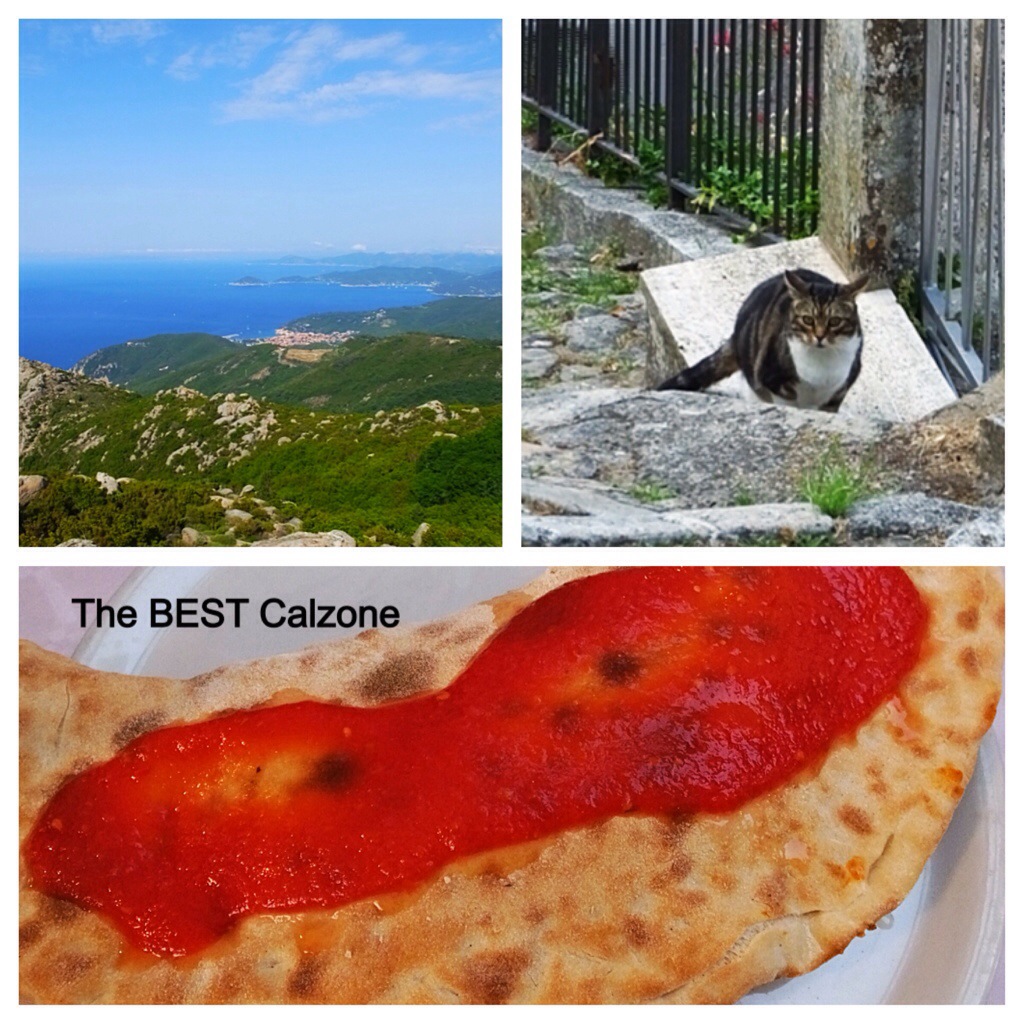 Yesterday, Sunday, was our day off. It was very welcome and I think we spent it incredibly well. First, we went to the beach you see pictured here. It’s on the west side of the island and its main attraction is the sunken ship people can visit just off the coastline. In the picture Giacomo has his snorkel on and is sitting on the rock nearest to the ship getting ready to brave the current and waves to see it. The boat itself is an ocean liner tugboat that sunk in the 60’s during a huge storm. It may have hit the exact rock upon which Giacomo is resting.

We went from the beach (Pomonte) to eat lunch in Poggio, a town near the beach and the hike we did next. I’d eaten a huge breakfast, again, of smoked salmon, toast, oatmeal, and yogurt with fruit, so I didn’t order anything. The restaurant was excellent, though, and served Sep some of the best pesto I’ve ever tasted. The boys racked up a bill of €100 between the four of them, which isn’t too bad considering they split two bottles of wine. They regretted that decision later while we were on our hike.

The hike started in Poggio and snaked up Monte Capanne, the highest mountain on Elba (1,019 metres (3,343 ft) in elevation). There is an option to ascend by cable car but we didn’t take it. Instead we climbed up the steep incline for about an hour before reaching a set of huge granite boulders that have been shaped by the elements over time to look, strikingly, like a crocodile, giant, elephant, horse head, and bear. I didn’t get any pictures of what the rocks looked like from far away except the one on which Sep is standing, way off in the distance (the elephant, although I can’t see the resemblance in this case). I had a lot of fun scrambling around on the rocks and trying to reach new heights, which resulted in me scraping my legs up pretty badly on the rocks themselves as well as the shrubbery that surrounded them (which had thorns). The views were worth it, though. It’s my favorite place on the island so far. The cool thing is the view hasn’t changed much since the path was built and the rocks discovered. The roofs visible below would also have been terracotta and there would have been sailboats on the water. I believe the road was built during Napoleons time on the island so as to be able to reach the top, where there are statues and shrines to the Virgin Mary and the Holy Trinity.

I was pretty tired by the time we got close to the rocks, as you can see from the closeup of my every red, very sweaty face. It was nice to get good excercises though. I made myself walk faster than anyone else in the group so that I’d feel like I’d done something useful for my body instead of just walking. Like I said before, the Wine-Consumers/Heavy-Lunch-Eaters weren’t very pleased with their decisions which may have contributed to their meandering pace.

anyway, we spent almost the entire afternoon engaged in the hike and with the exploration of the rock formations. We came back to Casa Fangati around 7 to get ready for dinner, which we had at Pizza 2001. It’s the professor’s favorite restaurant. It’s really quite good, and I hope we go back lots so I can get another delicious calzone.

Today so far I have successfully done another €190 three-days-worth-of-food shopping trip and managed to find the butcher that Professor Calleo is making me use. I ordered rabbit chunks and veal shanks from him so that I wouldn’t have to hunt all over the supermarket for them. Tonight I’m sticking to chicken, I think, in an effort to save my tired brain the effort of experimenting with a new meat (rabbit, specifically). I have the whole week planned out in recipes. Professor Calleo’s wife Avis arrives on Wednesday so I think I’ll cook the special veal then. Apparently she’s very finicky about how she wants things done, which I hope won’t be a problem for me and my cooking.

By the way, thank you Auntie Mery Caet for the tips on salad dressings. If any of you have other tips on anything to throw my way, please do. You can comment on posts by clicking the black circle with a white plus sign in the middle below each post.

Now, since it’s cloudy, I’m going to take a nap. We went out to Portoferraio again last night after dinner to walk around and see the street vendors and have a drink. I found the perfect nose ring to replace my nose stud so I’m going back to get it tonight. I didn’t have my wallet with me last night.

3 thoughts on “We Visit Some History”