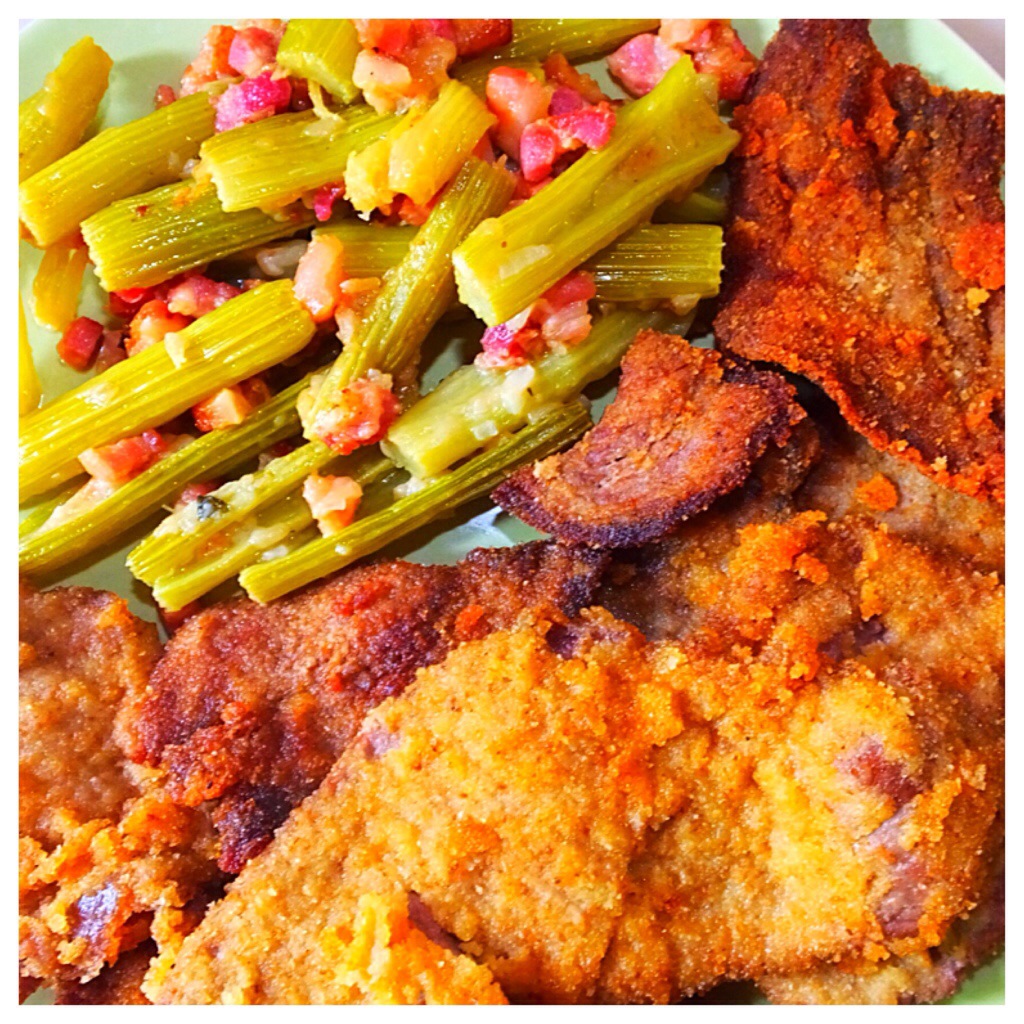 I deviated from the rules a bit on Wednesday and I did again yeaterday. The recipes written in Italian are throwing me for a loop. I knew I was making veal on Wednesday but I didn’t understand until I set out to make it that the cut of veal I got from the butcher didn’t match the cut of veal necessary for the recipe. Yesterday I thought I was making beets fried in butter, but upon closer inspection of the recipe I discovered that “coste di bietole” is actually code for beet greens cooked like chard. Google translate told me it was “coasts of beets,” which I took to mean flat discs of beets fried in butter. Not the case, and I’m out of luck because I didn’t buy beets with the tops still on them. So instead I used a recipe I found online for beets with crumbled feta dressed in red wine vinegar with parsley sprinkled over them. I’m surprised with how well they came out! We have guests today, Avis’ sister and her husband. I wish I’d discovered the dish today so I could have used it successfully with a bigger group. There are plenty of leftovers I can put on for lunch, though, which is good news.

I forgot completely, amid all the stress of cooking for Avis for the first time, to take pictures of the food I made Wednesday night. There wasn’t any leftover pasta to photograph (like I did with the second course), but if you can imagine super thin spaghetti tossed with flash-fried herbs and fresh tomato you’ve got the general idea. It wasn’t my favorite pasta; the favors were very mild and I didn’t particularly enjoy the experience of gingerly pouring smokingly hot oil over the ingredients to cook them. The Veal came out well, as did the celery (in my opinion). The celery was prepared in the fussiest way possible. Not only did I have to blanch it, but I also had to sautée it, fricasee it in broth with the sautéed onion and pancetta, AND bake it with Parmeggiano. It underwent three of the six major methods of cooking (the last three being grilling, steaming, and frying, though I might be missing more in my inexpertise). It was the dish that took the longest to prepare and create on the menu last night.

Last night I made Spaghetti alla Amatriciana, Pollo arrosto in Tegame, and the beet thing. I even remembered to take proper pictures of everything this time.

We had our first thunderstorm on Elba on Wednesday. It was quite intense; it woke me up very suddenly from my Relaxing Nap. We also went to Portoferraio both Wednesday night and last night to watch the match between France and Ecuador (Wednesday) and Russia and Algeria (last night). The match between Belgium and the US is Tuesday night at 10 pm here. One of the gardeners, Paul, is from Belgium. It’s going to be an intense match to watch!

Sep also found an abandoned baby bird while they were gardening yesterday. They found a nest and put the bird back, so I’m hoping it’s still alive. I don’t know the species, but it looks pretty common.

Today is lovely and warm. I’m thawing the veal for tonight that I’ll cook early in the day so I don’t have to worry about it later tonight. We’ll go to the beach today for practically the first time all week. I was disappointed that I couldn’t go recently, but then I pinched myself. I’m not allowed to be disappointed about anything while I’m on this beautiful island!