You deserve to see the sky by which I was greeted as I walked out of lab tonight. It was gorgeous. I’d just spent four hours inside freezing cold buildings doing stats and I walked out into the warm evening air to a beautiful sight. It had been raining all afternoon, so the humidity had finally dropped. I observed so many differences in how Norfolkians treat rain as compared to Ithacans or Detroiters.

I also learned that some dogs don’t like baths but will grit their teeth and bear it when they need to be cleansed of fleas. The neighbor dogs, though friendly, were infested and we’ve been battling them ever since Dezie went on a playdate recently: 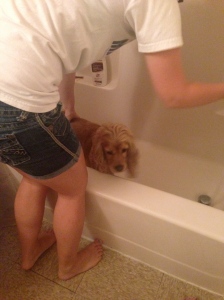 Isn’t she adorable? I think we finally got them all. She’s currently covered in baby oil and looking a bit like a drowned rat. Her skin was so dry from all the bathing and flea treatments she’d been enduring that we had to moisturize her somehow. Poor thing. 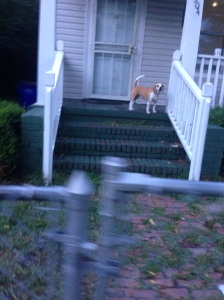 There’s a hound mix that lives down the street from me! I walk past him every day. He’s always out in the yard. I’ve learned that when it’s really hot he only barks at me twice because it’s too much effort to keep going. And he likes to hide under the bushes to stay out of the hot sun. His owner is very nice- there’s another very jumpy (as in dog’s got ups) black retriever mix that also lives there, but apparently he isn’t allowed out on his own on account of his ability to jump over the fence to greet unsuspecting strangers. 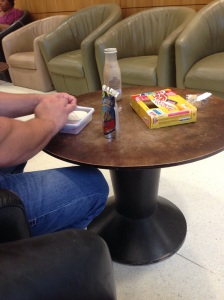 I also had cake today when I got home, leftover from Kelsie’s birthday cake. It was thundering while I ate it and it reminded me of one of my favorite childhood books: Thunder Cake!

That’s all for today, folks. I’m thankful for a lot of things that happened today and I’m happily tired and ready to fall asleep watching Netflix, surrounded by pillows.

One thought on “Thunder (and cake?)”