I have two major things to discuss with you tonight: 1) Proper acquaintence with my own research study and 2) Master Chef. I realize these things are relatively inconsequential. May I remind you that I did include a warning in my first post that not all of these posts would be riveting and insightful glimpses into my life. My daily life is far from majestical, and today was relatively normal. It was a good normal day, however, so I’m going to share two of my highlights with you.

First of all, I had a very productive day with my adviser in which I really came to grips with the nitty gritty pieces of my research study. I felt bad that I wasn’t getting it and I felt comfortable enough with him to say so. He reassured me that my confusion is allowed because this project is pretty complex and not one he’d usually assign as a first-year project (which made me feel pretty good). I can take the challenge; if there’s anything in academia in which I excel it’s dissecting complex fundamentals and explaining the background research well. I’m looking forward to working my syntactical magic and creating a concise, well-written, and (most likely) heavily edited study. He said we will most likely be able to publish our findings in a real journal, which is one major step further than other first-year students outside our research group are willing or able to go. It’s going to be great.

Secondly, I watched some Master Chef today. I have been missing cooking very much since I don’t have a lot of time and my funds are much more limited. I wanted to feel close to food again, so I satisfied my need through watching other people create beautiful dishes. Well, it had a double effect. I had a bit of a cathartic release as I watched the show and thought about how hard and rewarding it would be to compete alongside them. One of the challenges in the early part of the competition was to make a dessert from a given set of ingredients. It got me wondering whether I could create a dessert without a recipe in front of me. So I went to the kitchen and set about blindly making chocolate cupcakes with a raspberry frosting (never stray too far from tradition). I used applesauce to moisten the cupcakes and raspberry jam to flavor the frosting. The cupcakes themselves are delicious. The frosting tastes good but looks semi-ridiculous. I had the consistency perfect until I added vanilla extract. Even though it was a small amount of liquid it threw the whole thing off and turned it into an almost glaze. Oh well. I also had the brilliant idea to top the cupcakes with some thawed raspberries out of my bag of frozen fruit. This did nothing for their overall appearance except make them look like breasts, but it did improve their flavor. I certainly don’t have a problem with boobs, so creating cupcakes that look like they have nipples isn’t the worst thing in the world. It’s pretty comical to see them all lined up on a plate. Here’s a series of pictures to let you in on my process a little bit. You can tell me if you agree or not, but keep in the back of your head that they taste pretty good no matter what they look like. 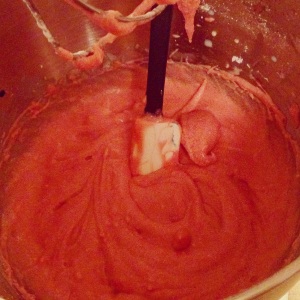 And, finally, the featured image is of my dinner tonight (And by dinner I mean dessert to follow the three cupcakes I had). A fried egg at 10 pm is as good as a fried egg at 10 am, especially if said fried egg is eaten with a toasted tortilla and slathered in ketchup. Hooray for impromptu, simple, and wholly inexpensively delicious meals. Also, hooray that a single egg is 12% of my daily protein!

One thought on “Eye-Openers”