I don’t have much to say tonight except that I relaxed all day and enjoyed a fun night out with my friends. I got to meet Ashley’s boyfriend! He’s very nice, and didn’t seem to mind having been invited to Girl Night.

I ate a burger today. This is rather rare for me and my body is currently reminding me how weird it was that I decided to eat one. Looking at this picture makes me feel a little gross, but it was delicious at the time. Now the only things I want are water and apples. 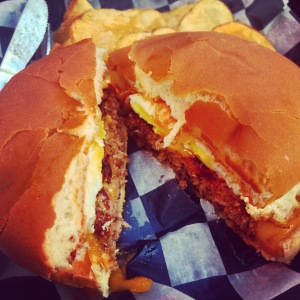 We went to Red Dog for dinner because they had half-priced drinks for three hours for happy hour. I had some delicious pumpkin beer:

Ashley and Chris went off to see a movie together after we finished and the rest of us went to Smalls for dessert. I had some delectable strawberry shortcake (which you see in the featured image) and met a new bartender named Crosby. Kelsie and I had a minor freakout because we’ve never met anyone named Crosby in real life before. Our favorite character on TV is Crosby from Parenthood (second only to Ron Swanson from Parks and Recreation, of course).

Dezie spent her day collecting spare socks from around the house and depositing them on the living room floor. I really don’t know where she finds them, especially since she didn’t have much time to spend on this task during the day because she spent most of it outside. This picture is from earlier today when we first realized how many she’d accumulated:

When we came home tonight we sat on the couch for about an hour just relaxing. We didn’t notice because we were playing with Monty the Bunny:

But while we weren’t paying attention she went around the house and found seven more socks. By the time we stood up to drive home/go to sleep there were ten different single (and paired up) socks scattered around the living room. I think she thinks they’re puppies. It’s pretty adorable. She’s possessive over them too; while Ashley tried to pick them up Dezie followed her around and tried to lie down on top of them.

It’s been a fun day, despite the fact that the only things I learned today were that fried eggs are good on top of burgers and that my socks aren’t safe from the Dezie Monster.

One thought on “Girls Night”