I went line dancing yesterday!It was so much fun. Ashley and one of her friends from undergrad have been going pretty often recently, and yesterday Kelsie and I tagged along. Ashley’s mom and sister came with us, as well as another one of Ashley’s friends I hadn’t met yet. 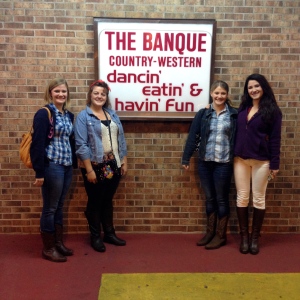 The twins are so cute! Their Mom is really nice as well. She spent the day with us (well, with me) yesterday and helped me bake bread and keep the dogs separate. Speaking of which, we weren’t always successful:

Dezie doesn’t know how to jump, so the couch presents a big problem for her. Bridget therefore sees the couch as safe and hides there. I give sweet little over-excited Dezie a lot of credit for trying so hard to socialize even when there are literal obstacles in her way.

Now back to line dancing. It was really fun. It’s not something I could see happening with such ease and gusto in the North. It felt old-fashioned but also fun and modern (there’s a dance to Ke$ha’s “Timber”). I tried to look up YouTube videos of said Timber dance but none of the ones I found matched the one I saw last night.

It seems that there are three types of dancing you can do. The first is what I immediately thought of when I heard we were going line dancing: dancing in lines. In grids. Macarena/Electric Slide style. The second is dancing with a partner while moving around edge of the dance floor. I did this a couple times and, as a result, kind of learned the dance step people keep calling the “two step.” The third is a typical slow dance, the kind where people just spin slowly in circles. My favorite dance, not necessarily a type, was the barn dance. I’m so glad we stayed long enough to do it. The one we did was a little different. The beginning was the same with the moving to the right and left but then things changed: we spun twice instead of once, ended side-to-side, stayed in place to touch feet. The partner switching happened after this routine and with a clap. I was often early with the clapping part, which was embarrassing. I guess each place you go to dance like this has its own style. I was expecting, when I looked up the YouTube video, for the dance to be exactly the same. I wonder if there are line-dancing “dialects” that change based on what part of the country you’re in.

One of the things I struggled with at first but got better at by the end of the night was understanding that it doesn’t matter if you don’t know what you’re doing. People just want to teach you the steps, and above all everyone wants everyone else to be having a good time. I don’t know how to do any of the dances, but if most of my table got up to dance I’d go up too and do my best to follow along. There are people who go line dancing twice or three times a week, and they’re the ones who help the most. A couple of times the ladies behind me held my waist to help guide me through the steps or shouted out instructions for which way to go next. And I got over being embarrassed if I did the wrong thing! We got there at 7:30, which was perfect because we only had to pay a $3 cover charge (it increases to $8 after 8 pm). Most people arrive later, though, so the dance floor was usually much more crowded than it is in this picture, but you get the idea:

We were seated right in front by this stage (which sometimes was also filled with dancing because the floor was too crowded) with the dance floor to our left. I had a great view of the front right corner of the dance floor, which meant I got to watch a lot of the complicated turning when people would dance together the second way I described. Women got dipped and flipped over backwards, men slid around on their knees, everyone kicked up their legs, lots of hats came off or were tossed in the air, and there was certainly a lot of twirling and stomping. It was lighthearted, enthusiastic, exciting, and warm. Everyone was a gentleman. There were no dramatics. Hardly anyone was sitting off to the side not having a good time. If they were, someone would pull them to their feet even if they’d never met before. It was a truly fun atmosphere. I certainly learned a lot, and I’ll definitely go again!