Any by everyone I mean any of you diligent, caring, interested souls who bothered to click over here and read my last blog entry despite the fact that I’ve been gone for two weeks.

I’ve been doing perhaps a bit too much learning. It’s officially the last week of classes and I’m preparing for my statistics final, finishing final papers, and giving presentations.

I did a lot of learning about my original hometown of Detroit (Ferndale/Royal Oak/Huntington Woods) this past week while I was visiting my Dad for Thanksgiving.

Jasper and I also went to a gig Dad had on Saturday at Cobo Hall in downtown Detroit. He played with his friend Simone’s band for this enormous post-baptism party. I’m pretty sure about 600 people were there, so the grand location was fitting. The party had a carnival-type theme so there were performers doing acrobatics on silk ropes hanging from the ceiling, walking around on stilts, balancing on exercise balls, doing artistic faceprint for the kids, etc. It was quite the spectacle. Jasper and I found a perfect place to hang out and watch everything and listen to the music. It was fun to see some of my Dad’s old friends who I’ve known practically since I was a baby and also have a low-key night hanging out with my little brother.

Cobo hall before all the people arrived

(He didn’t know I was taking a picture, otherwise I don’t think he would have tolerated it being taken.)

There were also some nice miscellaneous things about the visit, like Dad’s delicious leftover Turkey Soup,

And being in my Grandparents’ old house. I spent a lot of time there as a kid, so going back always brings back happy memories. Grandma always loved arts and crafts, and I remember this painted bunny from perhaps one of my birthday parties she came to once I’d moved to Ithaca. The wooden elephant was something I remember from their house, a decoration that probably sat on top of the piano. I slept up in the attic where my Dad and many (all?) of his siblings slept at one time or another. It’s just a cozy house and a nice part of going back to visit.

The week before Thanksgiving I had a lovely visit from my boyfriend. We went on lots of adventures, large (the Zoo) and small (the hardware store). I learned that the Norfolk Zoo is really wonderful- perhaps even better than the Detroit Zoo (which is the standard against which I judge all zoos). 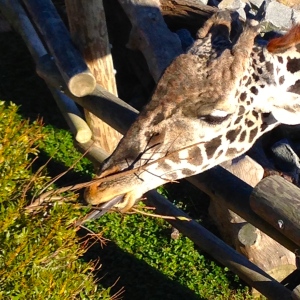 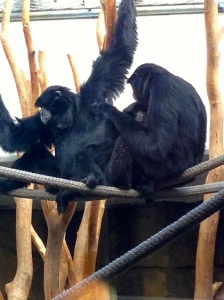 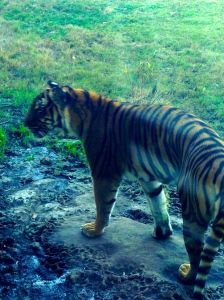 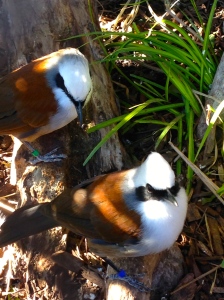 I made lots of tasty meals, sometimes just for the two of us and sometimes for a large group of friends. I didn’t take enough pictures of the food, but I got a few: 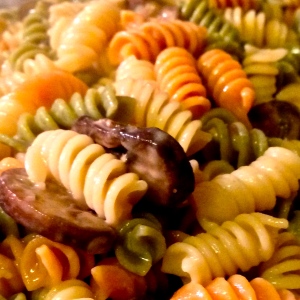 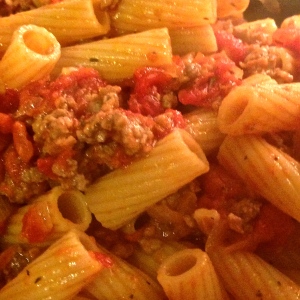 We went to an ODU football game (they won in overtime!) and watched some good movies (both old VHS Disney movies and the new Hunger Games). 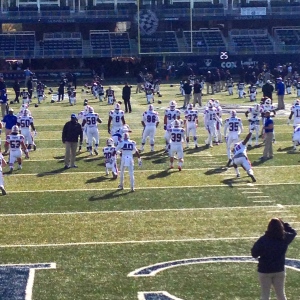 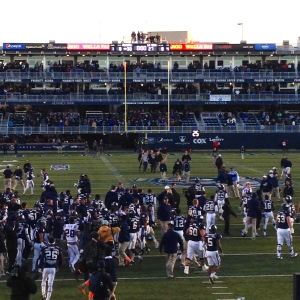 We went on nice walks in the beautiful Norfolk weather. We drank strong coffee and cheap wine. He saw my lab space, toured campus, and became fully acquainted with Dezie. He also helped us decorate for Christmas (he is tall, we are not), fixed things in the house, and helped me hang up a tapestry I couldn’t figure out how to rig without help. It was lovely. 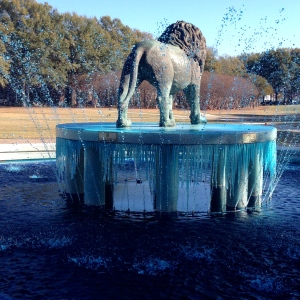 One morning, despite the relative warmth, there were icicles on the fountain.

And now I’m back in Norfolk, coming off of two weeks of fun into a week of torturous stats studying, data analysis, and paper-writing.

I have learned a lot over the last 100 days. I have moved to a new city and begun to learn how to navigate it. I’ve met, learned about, and come to truly enjoy two new housemates/friends. I’ve gotten to know the people in my graduate cohort, with some of whom I’ve become quite close. I’ve learned how to take care of a crazy little cocker spaniel named Dezie. I’ve even learned how to not watch too much Netflix when I have work to do. Perhaps the most valuable lessons I’ve learned are how to thrive on a $30/week food budget (happily!) and how to appreciate daily exercise (even if it’s westernized yoga).

I am thankful to my friends and family who supported me throughout this first transitional semester by reading my blog, calling me, sending me care packages and cards, and also to those new blogosphere people who gave me little blips of pleasure and happiness whenever they liked a post or started following me.

I’m done with blogging for a little while. This has been an adventure, but perhaps too long of an adventure. 100 days is a long time! I like talking about food more than I like talking about my relatively boring life, so perhaps I’ll start another one of those when I come up with a good idea. I mentioned wanting to try cooking Indian food. Maybe I’ll try a new theme, like cooking with a weird new ingredient every time I make a meal or going sans-recipe for a whole month. We’ll see! I’m not going to force the ideas to come but instead wait for a stroke of inspiration to light up my life.

So hello again, and goodbye!
Thanks for reading.